For the last two years, ever since I learned about the connection between lawn care pesticides and herbicides and canine cancer I have been extremely reluctant to take my dogs for walks off of our property. Actually reluctant is a mild term for it. Downright terrified is quite frankly the most appropriate way to express how I feel about walking my dogs on any piece of grass.

With each walk around the block I have pictured my Jackson and Tinkerbell with their noses full of carcinogenic substances, sniffing innocently and so unaware that humans sometimes intentionally cover the ground with toxins to keep weeds from marring their perfect green grass. For a few weeks after my initial Google binge during which I learned about the connection between lawn care pesticides and cancer in dogs, I kept Jackson’s walks limited to the local park, naively thinking that he would be safe there. But one day as I was driving past the park I saw a tractor spraying chemicals onto the grass on the park. An email from the park department revealed that they were spraying a broadleaf herbicide on that grass on which our puppies frolicked and our children ran around barefooted and innocent. So much for the park being safe.

During the winter I have walked them with a bit more mental peace but anyone who lives in the Chicagoland area knows that we go straight from warm weather to winter with ice covered sidewalks and ice melting salt all over and then back to warm weather without much of a fall or spring in between. As a result, most of my dogs’ exercise has been in our fairly large fenced in back yard.

Fortunately our yard is large enough for our dogs to race around as fast as their muscular legs will carry them as they play their games of chase and “bitey face” which is the popular name for the dog game of play-biting and snarling at each other either with or without full contact wrestling. We often joke that any of our neighbors who do not have multiple dogs probably wonder why on earth we let our dogs do this, but it is a standard and time tested type of play among many canine siblings and they rarely actually make contact with their large gleaming teeth. At least as far as our own dogs go, the second that one of them accidentally nips the other they stop the game for a few minutes to calm down.

I also accompany the dogs outside on each and every outing and so I have ample opportunity to throw their favorite West Paw Zisc to them and do lots and lots of training practice. I play outside with them all winter and their favorite game of all time is to play “snow zoomies” in which they run through the snow chasing each other as fast as they can.They also love to chase snowballs that I make and I am always amazed that they can find the snowball in the rest of the snow from the scent of my hands through my gloves.

With room to run and each other to play with I know that they are getting plenty of physical exercise. However, I have spent as much time feeing guilty over their lack of mental exercise as I have spent obsessing over the lawn carcinogens that they are picking up on walks.

This spring I have thought more and more about what they are missing out on by not going on leash walks. For awhile when the canine flu was new I had an excuse beyond lawn chemicals: they should not go out because of the threat of the dog flu. The panic of the dog flu has somewhat subsided even though the actual flu has not, and I am back to feeling guilty that they are missing out on exploring new places, working their minds, and doing the dog version of reading the trending stories of the day. The smells of the neighborhood sidewalks are the equivalent of our own Facebook and Instagram feeds yet mine have been missing out because of an overprotective dog mom. 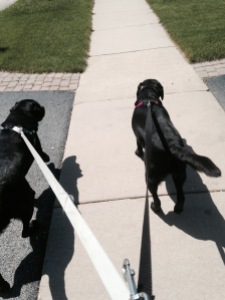 When it comes down to it, raising a healthy dog is similar to living a healthy life as a human in the sense that there are hazards all around us but we cannot, or should not, choose to live our lives in fear of leaving our safely maintained homes. We know the sun causes skin cancer but I spend plenty of time outside, about 75% of it with sunblock and the other 25% without. We know that smoking causes lung cancer and a myriad of other issues, yet I smoked until four years ago when puppy Jax was my motivation to quit. Some people joke that everything is bad for us, and sometimes I think it’s not that far from the truth. So this year I have resumed periodic walks into our neighborhood.

Just like I take precautions for myself and my family, though, I am also taking precautions with the dogs, including paw soaks and body wipedowns after each walk or at the end of each day. Although we cannot guarantee that we can prevent cancer, promoting a healthy immune system is one way that we can help our body fight back against antigens. As I have increased Jackson and Tinkerbell’s walks off of our property I have also increased some of the measures that I am taking to boost their immune system to battle the cancer causing lawn chemicals and other harmful substances.

Here are the steps that I take after walks or once a day if the dogs stay on our own property:

1. Wash all paws in a foot soak using water with apple cider vinegar (1/2 cup vinegar per gallon of water) or an organic pet shampoo. Swoosh the paw through the water and use your fingers to massage the paws for a few second while in the soak. Rinse thoroughly in a second container of plain water and then dry well, including between the toe pads and webbing for breeds with webbed feet.

2. Wipe the entire dog from nose to tail with a damp cloth, including their legs, belly, nose and jowls. You can also use the same ratio of apple cider vinegar to water to soak the cloth or spray on them with a spray bottle, avoiding the eyes.

3. Wash feet and lower legs of humans if wearing sandals or flip flops to keep from spreading toxins on the floor, furniture and bedding that the dogs lay upon. This is also a good idea for owners whose dogs lick toes or feet.

Watch for the next blog in this series in which I will elaborate on this infographic titled Promoting a Strong Immune System for Your Dog.

View all posts by Lynn Stacy-Smith

3 thoughts on “No Dogs on the Grass Part 2: Post-Walk Paw Wash”

This site uses Akismet to reduce spam. Learn how your comment data is processed.

Love, Laugh, Woof is a lifestyle blog for dog owners to read and learn about living a happy, healthy life with their dogs. My name is Lynn Stacy-Smith and I am your blogger and dog-obsessed writer.

Love, Laugh, Woof is a proud member of the American Pet Professionals

When you shop through an affiliate link, I receive a small commission from the merchant in return for merchant or product recommendations. Affiliate links are an important way for bloggers to earn income in exchange for the content and recommendations that they provide for free.

Thank you for supporting my website, blog, and my affiliate links. I will only suggest products or merchants that I personally believe to be of great value to my readers.